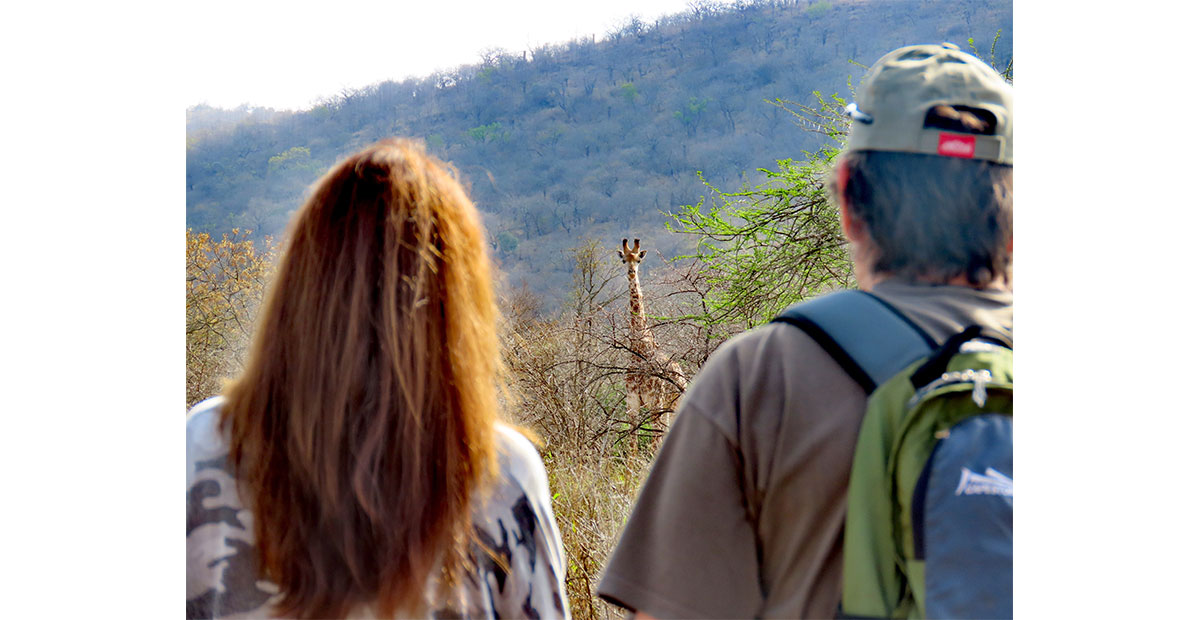 Deep in the heart of the Somkhanda Game Reserve, the new Africa4 Wild trails camp beckons one to come and experience the true thrill of becoming fully immersed in the African bush. No vehicles. No noise. Just you and your fellow trailists embracing the silence and solitude of your surroundings as all your senses become heightened. Suddenly there is no hum of a game viewers’ engine to drown out the sound of a rhino grazing on sweet grasses nearby. The thunderous crash of breaking branches as she makes a hasty retreat at having sensed your presence echoes loudly through the wilderness and when the noise stops you can still feel your heart pounding in your chest. The soft scented earthy aroma of crushed leaves and soil kicked up in her retreat lingers in your nostrils as all becomes calm again and the silence returns. It’s not often an opportunity presents itself to taste the edible leaves of the herbaceous wildflower, Clinopodium vulgare (Wild Basil) which has many medicinal qualities and is also used in cooking. Sight, sound, smell, touch, and taste. There truly is no better way to experience the African bush than in 5D. 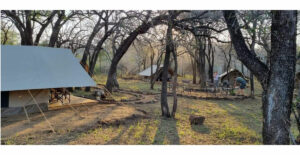 I recently had the privilege of visiting Somkhanda Game Reserve for the first time to experience the newly launched Africa4 Wild Trails camp which nestles serenely under a canopy of Tamboti (Spirostachys Africana) trees. It certainly did not disappoint, and I was left in awe of the reserve’s stunning natural beauty and biodiversity.

Unfenced and wild in the true sense of the word the Africa4Wild camp boasts four East African styled tents accommodating a maximum of eight guests. Each tent is equipped with two wonderfully comfortable twin beds clothed in crisp clean linen with a warm throw for when the weather turns a little chilly.

Strategically placed in the center of the camp the fire pit takes center stage. It is here where the aromatic aromas of hearty authentic bush meals waft through the air making your tastebuds salivate. It is also here where lifelong friendships are formed as guests share an evening under a canopy of a million stars enjoying sumptuous food, a few glasses of good wine and a common love of the African wilderness.

Unlike other wilderness trails I have been on the Africa4 Wild trails camp offers a few creature comforts which I know the ladies, and if they dare to admit it, the men too, will appreciate and that is proper flushing toilets and hot showers. No spade and “bush-loos” here.

“Expect nothing but appreciate everything.” The one thing you can be certain of on a wilderness trail is that mother nature has her own play-book and what she is prepared to reveal to you on any given day is completely up to her. You may have a day of adrenaline filled lion sightings where the loudness of their roar from no more than 20m away reverberates through your entire body sending shivers down your spine and giving you goosebumps or you may have a day where the closest you get to goosebumps is to feel the caress of a soft cool breeze as it flirts across your skin. The trick is to appreciate it all, both the big and the small. Then you are guaranteed to come away having experienced everything.