Hikers can tick off their bucket-list on this leisurely 3-day trail in the second largest canyon in the world . . .

Did you know that the canyon was carved by a giant snake?” I asked my hiking buddy as we sat at Battlesnake Camp and looked out onto the awe-inspiring depths of Namibia’s Fish River Canyon. It was the first day of the Klipspringer Trail and we had followed zebra tracks to walk down the stone staircase of a river gulley, etched with fossilised water ripples. Dassies (rock hyraxes) shrieked in surprise and ran off and a kudu bull bolted on the incline above us, loosening stones that cascaded down the rocky slopes.

“Really?” she answered. It was easy to see the meandering shape of the river from the canyon rim, revealing hundreds-of-millions of years of geological activity and erosion. Great places invite imagination and great legends, however, like the old Nama legend. It describes how the gigantic leviathan had been preying on the people’s livestock until they smoked it out of its cave and went after it with knobkieries and spears. Its death-throes are said to have created the dramatic chasms and fi ssures we see in the canyon today.

Our day, in comparison, had been calm and heavenly as we reached the canyon depths, swam and skipped stones at the confl uence of the Fish and Löwen rivers, before continuing along the Fish River’s sandy bank. Lunch was happily spent loafing at a natural jacuzzi in the river, before climbing up a rocky gully to reach the plateau and rustic camp. There we found our trunks containing our clothes and food, which had been delivered to the kitchen cabin, as arranged. It wasn’t long before we had made a fi re in the ‘donkey’ boiler to warm water for hot showers, an unexpected luxury in the canyon wilderness. There was nothing else to be done except to watch the late afternoon sun paint the spectacular landscape in gold, and to shower, cook supper and retire to our wooden cabins to fall asleep on soft mattresses to the sound of the wind. Life was indeed good, and walking through the ancient canyon couldn’t have been easier.

The leisurely 32km trail in the Gondwana Canyon Park is suitable for the whole family (although an average fitness is required) and, rather than being a strenuous endurance test, is a slow-paced fun-fi lled experience. Camps are positioned both in the riverbed and on the plateau to give hikers prime views and a full experience, while the night prior to departure is spent at an old farmhouse near the start where hikers are treated to a delicious barbeque. 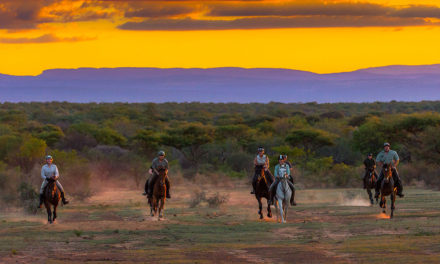 Foodies on Safari in South Africa