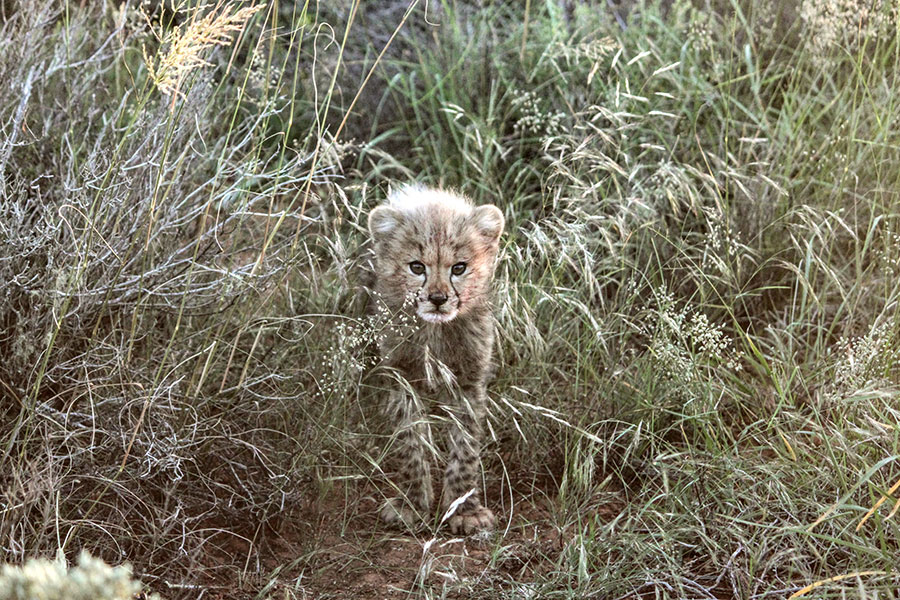 A FIRST ON MANY FRONTS: ASHIA’S FIRST RELEASED CAPTIVE-BORN MALE, FATHERS THE PROJECT’S FIRST CUBS TO A WILD FEMALE

Amakhala Game Reserve, Eastern Cape, South Africa – April 2020: In September 2019, exactly a year after the launch of the landmark Breeding, Wilding and Release Project jointly set up by Ashia and Kuzuko Lodge, Ivory, the first cheetah to be released from the project, was translocated to his new home at Amakhala Game Reserve. A month later he was spotted mating with the resident wild female. 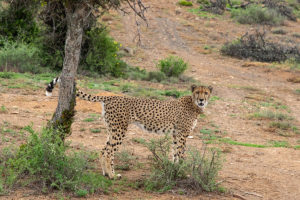 “We would like to welcome our newest members to Amakhala, two healthy, adorable cheetah cubs. These cubs are extra special as they are sired from a captive bred cheetah who was released into the Protected Environment of Amakhala at the end of last year,” states Natalie Fowler, resident Ecologist at Amakhala Game Reserve.

A promising photo showing the mating of Ivory with the wild female was taken at the end of October 2019, just a month after his release. The Amakhala team suspected for some time that their wild female had given birth but the mother, a wild cheetah, hid the cubs well, only bringing them out of the den after about 6 weeks. Fowler was relentless in her search for photo proof and to find out the exact number of cubs. Fowler adds, “They will follow their mother around for the next 16 – 18 months while she teaches them vital survival skills like the ability to hunt their own prey. We look forward to sharing their journey with you as they grow on Amakhala.”

Chantal Rischard, Founder of Ashia says “We are very excited about Natalie’s amazing proof of at least two cubs. We are hoping for some more photos of mom with the cubs soon. Our grateful thanks to Natalie and the whole Amakhala team for the thorough monitoring and great care they provide for their cheetahs. We are also very proud that the joined Wilding & Release Project between Kuzuko and Ashia has finally achieved its ultimate goal: raising the cheetah numbers of the South African Metapopulation through the birth of wild cubs following the release of once captive-born males and females!”

Gerhard de Lange from Kuzuko Lodge was instrumental in the successful wilding of this male who didn’t have the easiest start in life. After being used for cub petting, he went through difficult, at times aggressive phases, completely refusing further interaction with humans. De Lange managed to convince the Ashia team to purchase him and to give him the chance of a free life. “Thanks to the very special bond that Gerhard established with this exceptional hunter, he calmed down so much at Kuzuko and regained full trust in humans – while always keeping his distance. “He’s such a character!” adds Rischard.

It turned out that the calm and caring but hands-off approach was the perfect recipe for this freedom-loving cat. It therefore doesn’t come as a surprise that Ashia celebrates its first wild cubs with him.

The Breeding, Wilding and Release Project primarily focuses on the wilding and introduction of captive-bred cheetahs and their offspring into the protected wild. The ultimate purpose is to strengthen the gene pool and to secure a viable cheetah metapopulation in South Africa, in order to prevent the further decline of cheetah numbers in the wild.

The release of captive bred animals has become an important conservation tool for restoring threatened and endangered wildlife populations. The translocation of animals for conservation purposes requires in-depth planning and monitoring  to ensure the long-term chances for survival of the released animals. The South African Cheetah Metapopulation as well as all cheetah translocations are coordinated by the Endangered Wildlife Trust (EWT).

Rischard concludes “It was this very same male that set a huge landmark in our conservation achievement last September: his translocation to Amakhala marked the first of many releases of captive-born and successfully wilded cheetah from the Kuzuko wilding section to a game reserve. We all wish the new family best of luck, and the proud father many more offspring!”

All loved up at Umngazi Hotel & Spa

RHINO TEARS WINE: RAISE A GLASS TO THE RANGERS